Nampa High Experience is All in the Family for these Bulldogs 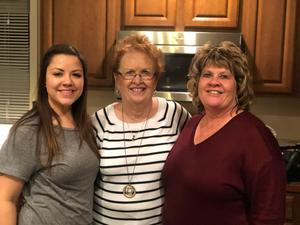 For three generations of women, NHS provided a relevant education, school pride and a sense that every student mattered.

As parents, we love sharing the best parts of our childhood with our own kids – our favorite toys, movies, games, food. One Nampa family took that a little further, with three generations graduating from the same school – Nampa Senior High School.

Patti Palmer Kalousek, class of 1963, attended East Side Elementary (torn down in 1997) and Central Middle School (now an elementary school). Her high school memories include attending a lot of dances, both at the school and in the community. She also remembers driving around the football stands after games and hanging out at the Reed and Bell, A&W and the Toot & Tell Drive-in. She now helps organize all of her class reunions, most recently her 55th held this past summer, and seeing a lot of her former classmates.

Her daughter Debbie Regalado, class of 1985, also attended East Side Elementary, before heading to South Junior High. She competed in gymnastics and tennis at South, and in volleyball at both South and Nampa High. She and her friends never missed a football game, whether at home or away, and she kept stats for the wrestling team. After a game, she could often be found at Keystone Pizza, now the home of the Getaway Bar and Grill on 12th Avenue. Other favorite haunts included Red Steer, Wee Willies or Mike’s Donuts.

Adrianna Regalado, graduated in 2009 with many of the same kids she grew up with at Centennial Elementary and West Middle School. She remembers dressing up in red, white and blue (Nampa High’s school colors) and painting her face to attend football games with those same friends. They usually ended up hanging out at someone’s home afterward. Many of their parents and grandparents were also friends, making for a tight-knit group. “Our parents all knew each other and we could never get away with anything,” she recalls. She played on the softball team (“we were terrible”) and was involved with the TRIO Program that provides tools to encourage minority students to enroll in college. Her brother, Jacoby, also attended Nampa High, graduating in 2013.

While each generation saw changes in district boundaries and social norms, the most important things remained constant across the year – a relevant education, school pride and a sense that every student, no matter their circumstances, mattered.

All three women pursued higher education after graduation. Patti headed to Boise Junior College for a year before getting married and then returning to Nampa. She later worked in the banking field, most recently in the mortgage loan department. Debbie enrolled in paralegal courses at Boise State University for a year before taking a job at the Idaho Press Tribune, where the many business classes she took at Nampa High served her well. She eventually moved to the Idaho Statesman, and eight years later returned to the Idaho Press, where she currently is a marketing consultant.

Her daughter, Adrianna, headed to the College of Southern Idaho after graduation, with scholarships to study nursing. Two years later she returned to Nampa. She took a job as a personal banker and bought her own home at the age of 22. After taking additional courses she now has her own business as a massage therapist and aesthetician.

They all agreed that the skills they learned and relationships they developed at Nampa High School have served them well.

“My teachers were great; I felt when I got out that I could stand on my own two feet,” said Debbie, who moved out to live with a roommate right after high school. “I learned how to communicate with people and felt I could get along well. I have always had challenges, but I learned how to get past them.”

Adrianna remembers the life lessons she learned from her favorite science teacher, Mr. Jim Kusterer – who also happened to remind her of her grandfather. “He taught me critical thinking, and that solidified my need to go into a career that required science-based thinking and reasoning,” she said. “He helped me think through every scenario, looking at the consequences and rewards. That’s a good life skill.”

As a grandmother, Patti is known for her cooking skills, something Adrianna said she’s never mastered. Those skills were honed under the direction of home economics teachers Mrs. Keck and Mrs. Hunt. In her psychology class, she also learned a lot about who she was and how to deal with the doubts and problems that are part of being an adolescent. “My teacher was Mrs. Jarvis, and we talked a lot about what was happening in our lives,” she recalled. “I could relate to that. She helped me sort out who I was and where I belonged, and she taught me that I was OK the way I was.”

All three women appreciate the chance to share the Nampa High experience. Adrianna now has her own daughter, still a toddler. While imagining her as a teenager feels foreign, she recognizes that she could be raising a future Bulldog. And that’s OK with her.

“It gave me a sense of security to have friends who all grew up here,” she said, “and to have our parents all grow up here. It was a solid foundation.”