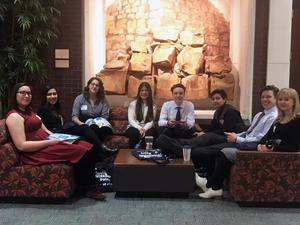 The Team+S STEM club excelled at the Western Idaho Science and Engineering Fair and two students advance to international competition.

A presentation by Jacob Kratz and Kimberly Barron took second overall in the state and the pair was invited to compete at the Intel International Science and Engineering Fair in Phoenix, Arizona, in mid-May. All expenses are paid for by INTEL and the state of Idaho. Competitors at the international fair come from 77 countries, regions and territories.

Kimberly Barron and Jacob Kratz: First in scientific study and engineering; first in group engineering, and second for the state of Idaho